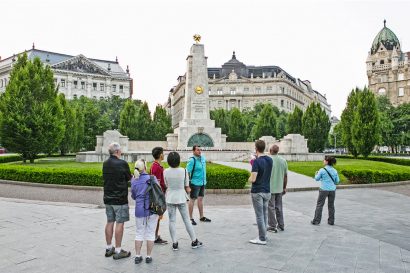 Today’s Budapest is a thriving metropolis with a population of around 2 million people. It’s a city famous for its architecture which is a mixture of Gothic, Bauhaus, Art Deco and Communist. It’s also renowned for it’s food, which has been influenced by various invading forces, including the Turks. And then there are its thermal baths, also a byproduct of the Turkish invasion, which allows thousands of locals and tourists to enjoy a good soak every day of the week.

But Hungarian history shows us that things here were not always so good. Hungary allied with the Germans during World War II. In 1940 Hungary joined the Tripartite Pact and started enacting laws which suppressed the the city’s Jewish community. The Jews were then sent to the ghetto, the remains of which can be seen on Dohany Street. Eventually they were rounded up and in 1941 Hungary deported it’s first 40,000 Jews who were sent to concentration camps, with many also shot into the river. You can see a striking memorial to this called Shoes on the Danube, located by the Parliament building. Between May 14 and July 18, 1944, over 430,00 Hungarian Jews were deported to Auschwitz-Birkenau in 48 trains. Most saw the end of their lives with gas poisioning.

The city was sacked by the retreating German army and then again by the Soviet Red Army, who were to be the new occupying forces. The Soviets quickly moved to oppress Hungarians and their way of life became restricted. In 1956 there was a big revolution push, but this was quickly put down by the Russian using tanks. October 26th is the remembrance day for this event.

The revolution did lead to some loosening of restrictions and Hungary became one of the more progressive members of the Soviet bloc. Many people, for example, would come from other countries to shop on Vaci Street, a famous shopping street where Western brands were on sale. Today the street is still popular among tourists.

Finally,1989 saw the Russians leave. At last Hungary was free and with it came the restoration of democracy. It quickly modernized and joined the European Union in 2004. So far though it has avoided joining the Euro-zone and still retains it’s national currency, the Forint.

If you’re curious about Hungarian history take one of our many tours. And to learn more about life in the Soviet times, take our Hammer & Sickle tour.