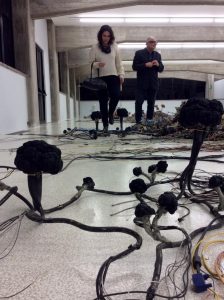 The Contemporary Prague Art Scene. An exhibition at the Jiri Svestka Gallery

The contemporary Prague art scene first came into focus in the golden inter-war period of the first Republic of Czechoslovakia. Then artist like Josef Capek, Toyen, Otakar Kubin and Frantisek Kupka were doing work that was getting noticed all over Europe.  Prague has been pushing to regain its former glory since the Velvet Revolution in 1989. In the process it has been busy cultivating a hip local arts scene that has a lot offer the curious.

Prague is unlike most cities which have a defined art street neighborhood. Here the galleries are spread out and almost all are completely located outside the typical tourist areas. Here are four that you should definitely check out: 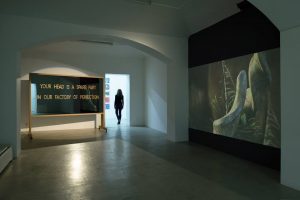 The Contemporary Prague Art Scene. An exhibition at the Hunt Kastner Gallery

This gallery is active since 1995 and is located just outside the Old Town. The Jiri Svestka Gallery has done more than any other gallery in fostering the local art scene. It’s also responsible for helping to push Czech artists onto the international scene. Much is its popularity derives from it’s recently opened sister gallery in Berlin. Housed in an unassuming old brick factory building, it’s hard to find unless you know where you’re going. But it’s a great item to tick off  from your “hidden Prague” list.

You’ll have to take a trek over to the fashionable Žižkov part of the city to see this place. As an example of Prague’s increasingly international art culture, this gallery is run by two expats, Canadian Camille Hunt and American Katherine Kastner. While unknown to most tourists, it has become a fixture of the local community. Also it has acted as a staging post for several local young and progressive artists. The gallery has also presented the work of new artist at several major fairs abroad.

A visit here also gives you the advantage of being close to the nearby Letna Park. It’s a great place to sip beers under the evening sun in spring and summer.

An exhibition at the DOX Center for Contemporary Art

If you’re walking along the beautiful Vltava River, then be sure to stop in a DOX Center for Contemporary Art. This was a former sheet metal factory. It has found new life as a grand art space with larger than life exhibitions. Over the years it’s put on 100+ exhibitions, cementing its reputation among Europe’s galleries.

Their library, chic design store and cafe are another great reason to stop by for the afternoon.

Another off-the-beaten-track gallery is in the fast-developing Karlin neighborhood. By the way, this is the only part of Prague standing on a grid system. Some people feel that the neighborhood has the potential of becoming the city’s ‘art district’.

Karlin Studios opened in 2005 as work spaces for developing artists. Many leave their doors open for visitors and the ground floor has an exhibition space. Karlin Hall can is around the corner. This used host the Prague Biennial and continues to host various exhibitions.