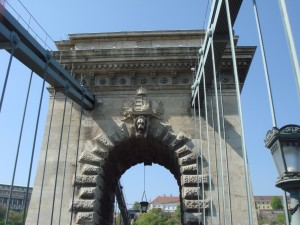 The Chain Bridge is a real Hungarian icon. It is the symbol of the city, and you can even see it on a 200-forint coin. You’re probably wondering why it has the name ” chain bridge” when there are no chains. Well, it is actually not the vertical parts, but the two long continuous arcs that are  chains.

These are more like giant-sized bicycle chains, but they really do move and shift, running over metal shoulders inside the two towers. They are fixed to huge anchors in the “chain chambers” far below the hill and deep underground in Pest.

What is so special about the Chain Bridge?

Apart from being simply very elegant and attractive, the bridge is interesting for many reasons. Most importantly, it was the first permanent bridge across the Danube in Budapest, way back in 1839 -43.  And was at that time, the longest suspension bridge in Europe. It’s commissioner was Count István Széchenyi who was one of the country’s great statesmen. He saw a need to draw together the communities on either side of the river for the sake of progress. 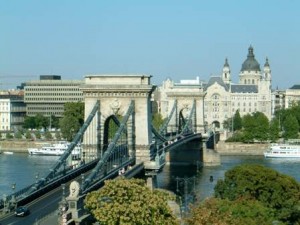 A more personal impetus is that when his father passed away in the dead of winter, the Count could not make the ferry crossing due to extended bad weather, and thereby missed the funeral. It has a British connection too. The designer was an Englishman whose name was William Tierney Clark, and the chief engineer was a Scotsman also with the same surname, Clark. This latter one, Adam Clark, was a great engineer and he was also was responsible for the tunnel to the west. He was quite a character and the square at the Buda side of the bridge takes his name. The construction was ongoing for a decade and for its vast expense there was partial help from a toll, which even the aristocracy were reluctantly paying. Apparently this was quite an affront, at the time. This toll was unnecessary for the new bridge after World War II. 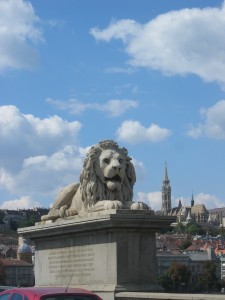 Perhaps the most well-known story is that of the Lion statues. Apparently the sculptor and designer of them forgot to add tongues. this set the people’s tongues wagging, and as a consequence he was so full of shame, that he took a jump into the Danube to drown himself. It is a popular story, though not true. The artist himself, one János Marschalkó, who saw some 29 more years of life after finishing the bridge, found himself becoming tired of hearing it.  His retorts were something along the lines of “They do indeed have tongues! It’s just that they are inside their mouths, for they are not hounds panting in the sun, with their tongues lolling out!” It’s true that you cannot see them at all from street level, though. So there!