St Stephen’s Basilica – What Happened to the First Dome? 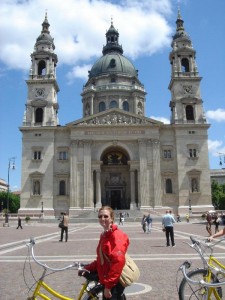 This is it, St Stephen’s Basilica is the biggest church in the capital, though interestingly enough, not the largest in the country. For that title belongs to the mega basilica on an imposing hilltop. And that’s in the town of Esztergom on the Danube Bend, just under 50 km to the north. Incidentally the construction of the St Stephen’s Basilica was a real drama. 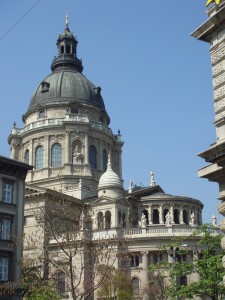 It started in 1851 according to plans by one architect József Hild, who died in 1867 with it still unfinished. To make things worse, the main dome was heavily damaged in 1868 and the plans had to be redrawn. This was by Hungary’s most famous architect Miklós Ybl, (he of Opera House fame) but he never got to see it’s completion. After dieing in 1891 at the ripe old age of 77, and the basilica was incomplete and unopened until 1906.

This church’s namesake is St Stephen, the first Canonised King of Hungary. You can see him receiving the blessing of the Virgin Mary in a huge oil painting. St Stephen’s eerily preserved right hand is still in a chapel on the left of the building. In a touch of bizarre showmanship, it lies with lights down, but if you put coins in a slot, the lights come on for a short time. There’s probably a joke about this with regard to the Church and money.

The St Stephen’s Basilica is easy to reach on foot from the river, or by metro 2 (blue line) at the Arany János Utca stop. Then if you fancy climbing the 302 steps up to the 96m dome (or taking the elevator halfway up) for a small fee, you will be get to see a great view of the city. There is an ordinance that no buildings may be higher than this, so in this area the view is all yours. The dome of the Parliament is exactly the same height, symbolizing the equality in worldly and spiritual matters. There’s probably a joke in there as well.

Cost: It is nominally “free” but a donation of 200 HUF or more if you succumb to feelings of guilt . To get the full effect, either take a trip up to the top of the dome for 400 HUF, try a guided tour for about 2000 HUF, weekdays 10-3,  or see an organ concert (Mondays at 5pm for 3000HUF and more expensive Gala Performances on Fridays.