The History of the Budapest Ruin Pub

The city of ruin bars 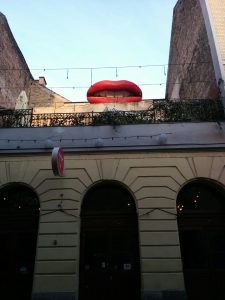 The Hungarian capital is known for many things: its beautiful thermal spas, the green parks, and the unique architecture. And, as you may know, Budapest is famous for its ruin pubs/bars, as well. There are plenty of them in the city and they are really popular among locals and of course among tourists. Check the guide book for bars in Budapest and you’ll probably find Szimpla Kert. That’s because it is the #1 ruin bar in the city, and now world-famous.

What is the story behind?

It all started with the Szimpla Bar located on Kertész street (it still exists as Szimpla Café), then followed by another bar which stood on Király Street. This latter bar had an outdoor courtyard, as well.

The area where the former Jewish ghetto stood during the Holocaust was a scene for sadness, a real victim of post-war abandonment. The entrepreneur’s idea was to have something new in the area, a new trend, something which makes it alive again. 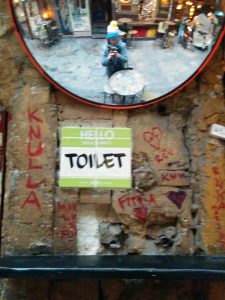 14 Kazinczy Street was one such abandoned building. Formerly it used to be a fireplace-factory but back in early 2000 it was about to be demolished. The owner and entrepreneur of Szimpla took over this place as he knew it would be an ideal spot for his dreams, so he moved the Szimpla bar here.

To decorate the place, they used and still use creative, colorful objects, hanging them just randomly, all around, as well as old-fashioned furniture, as well. It’s a design style that helps you feel at home. Since opening there has been a team solely responsible for keeping the decorations fresh, so that each time you visit, there is something new in there. Visitors also help shape the building, leaving stickers and messages, and carving and drawing on the walls. This is what makes the place special, a real meeting point for people.

Since Szimpla Kert was opened, many other pub owners wanted to copy the style, and so a new wave began: the era of the ruin pubs. Today there are more and more of them opening, all trying to continue what Szimpla has started. They can be usually found in the 7th district, the Jewish Quarter. The reason is that after WWII, the area was so damaged, and grey, artists and young locals started to invade this space to start something new, to bring it back to life again. So now the 7th is the main bar area, also called to be the party district.

What can you expect from a ruin bar? 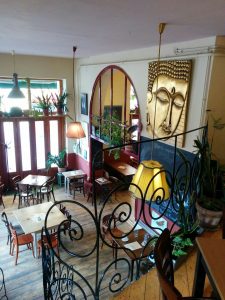 Most of the times, it is not just a simple bar but also a spot for alternative culture, theater, music events, and even a  farmers’ market which is held on Sundays. Don’t hesitate; find your way around the Old Jewish Quarter to experience some real Budapest atmosphere. Check out these cafés, bars, to have a drink, or to get some typical Hungarian snack.

Find out more about Szimpla on: szimpla

Or try out another Budapest ruin pub to become an expert: ruinpubs

If you also join one of the tours of Alternative Budapest, be sure that you will learn more about this culture and get to know places like this with a great guide.