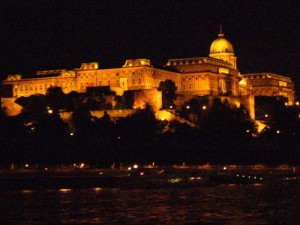 Many people often mix these up, though they’re almost the same thing. Buda Castle is the name common to the Royal Palace of the Hungarian Kings at the southern end of the Castle Hill. This is only one of several sights with connections to this previously-bustling capital area. The entire walled area is the Castle district. You can stroll around this area for a few hours and you will have seen one of the greatest sights of Hungary. It is even UNESCO protected. Then walk down and across the Chain Bridge to Pest, marveling at the enormous chains that support the roadway. Look back for some great photos.

Getting up to the Buda Castle

Take a walk across Adam Clark Square (named after the Scottish engineer who oversaw the construction of the bridge), and hike up either of the serpentine paths to the right and left of the tunnel. Those less able-bodied, or desperate to give up a few Euros for a 2 minute ride can take the funicular railway up to the top. Eventually it all ends up at the same place, the scenic lookout point just behind the President’s residence at the Alexander or Sándor Palace.

To the south lies the great domed Royal Palace. The courtyard of which was the setting for the big dance finale in Katy Perry’s “Firework”. This is also the entrance to the National Art Gallery and the Budapest History Museum. Why not take a walk along the quiet “inland” side of the castle walls for some great panoramic views of the Buda Hills.

What to see at the Buda Castle 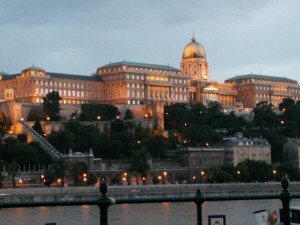 Turn round and you’ll end up with a nice side view of the Matthias Church. Then turn in and walk past an area  full of cafés. If you feel peckish while wandering the Buda Castle, do take the chance to try a few local snacks in Ruszwurm Cafe. If there is enough space, squeeze inside to enjoy a sticky cake or hot chocolate on the largest sofa. But the real deal is to sit and people watch either inside or out. Furthermore the waiting staff are often a glorious study in inefficiency, with hilariously curt manners. At the very least, these are good places to pick up an ice cream in the summer.
So take a look at the Church and the large Holy Trinity statue in front of it. And at the completely over-the-top Fisherman’s Bastion. 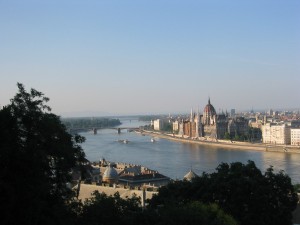 Finish your visit with a stroll around the quiet north end of the Buda Castle district. There are a few things to see there. A passable war museum and the tall ruins of the Magdalen Church opposite. The National Archives building at the very end next to the Vienna gate which has a beautiful tiled roof. Finally it’s easy to take a bus down to Széll Kálmán Square, and Metro line 2 (red) back to Pest.
The Metro 1 does not reach Buda Castle.