The Basilica of St. Francis of Assisi in Krakow, also known as the Franciscan Church 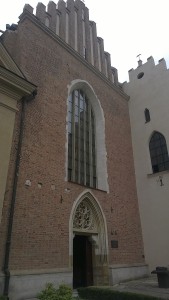 Entrance to the Franciscan Church, from the Planty Gardens side

The Basilica of St. Francis of Assisi is one of the oldest and best-known churches in Krakow. It dates back to the early 13th century. and and was probably founded by duke Boleslaw V the Chaste. However, the franciscans had settled in Krakow a few years earlier, in 1237, when Boleslaw was still a boy. The monks were invited to settle in Krakow by duke Henry I the Bearded (or as some historians claim, his son Henry II the Pious). Nonetheless, the first Franciscan temple was built around the half of the XIII century, between 1237 and 1269, when the church was finally consecrated.

The church was in need of rebuilding several times in the XV, XVI, XVII and XIX cent. This was mainly due to disastrous fires (in 1462, 1476, 1655, 1850). Nonetheless, the Franciscans living in the monastery by the church were hard-working and pious men and after every calamity they took to patching up the temple again and again. The four hundred year Franciscan determination was rewarded in 1920, when on the 23rd of February, Pope Benedict XV elevated the temple to the rank of basilica minor.

During WWII and the German occupation of Poland and Krakow the Wawel Cathedral was closed, and so the Franciscan Church served as the Krakow’s bishop’s temple, mainly because it was and still is located right next to the Bishop’s Palace.

The Franciscan Church was one of the favourite prayer sites of the bishop, archbishop and cardinal Karol Wojtyla (later known as Pope John Paul II.) When he served in Krakow, he lived next to the church, just across Franciszkanska street. As Pope, John Paul II visited the basilica twice, in 1979 and 1991. 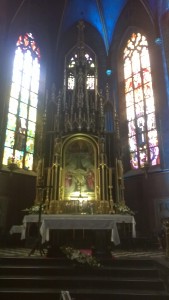 Important! No sightseeing the church during mass.
Cost: Admission to the church is free.
More information: http://www.franciszkanska.pl/informacje.php [only in Polish]