The second half of 19th century is known to Czechs as a period of National Revival. After being many centuries under the reign of Habsburgs (from Austria), Czechs were in danger of losing their own culture. This was the reason why they wanted to support anything national that would boost the national pride of Czechs. Thus the Czech National Theater became a symbol of this entire movement. 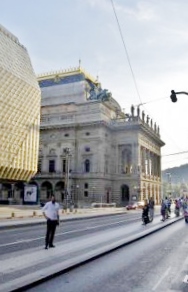 The National Theater in Prague’s foundation stones were laid on May 16th 1868. And we say stones, plural on purpose. There were foundation stones from all across our country, especially from places significant to our national history. This laying of foundation stones was such an important event, that historians estimate there could have been around 100,000 – 150,000 people present. The builders were finishing the foundations by the end of 1868. Finally completing the great edifice up to rooftop level by the end of the next year.

Many scenes from Slavic mythology were the inspiration for the interior decoration. Some of the most famous painters of that time participated. The theater was opened  on June 11th 1881 with a premiere of Libuše – a famous opera by Bedřich Smetana. But then came a great tragedy. During the final works on the roof of the theater a terrible fire occurred on August 12th, 1881. Consequently this heavily damaged the entire building.  This was devastating to the Czech nation. But the people were quick in organizing a new collection of funds for restoration, gathering the full amount necessary in just 47 days. The National Theater reopened on November 18th, 1883. Today the theater reminds the Czech people that great things are achievable by staying united. 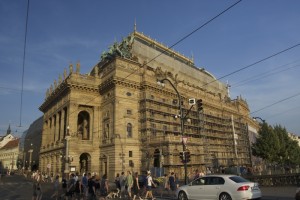 Info on the National Theater in Prague: