Lonely Chairs in the Centre of a Once-Crowded Square – The History Behind the Ghetto Heroes Square.

Among the many Krakow historic monuments and memorial sites there is a very unlikely one. Almost everyone asks about when they first see it. Unfortunately, not many people can give them the right answer. So let’s try to do so here. 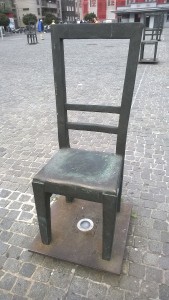 One of the memorial chairs on Ghetto Heroes Square.

It is the Ghetto Heroes Square with its 33 memorial chairs of iron and bronze. These chairs symbolize the tragedy of the Polish Jews. These inhabitants of Krakow were imprisoned in the Krakow Ghetto during the Second World War and the German occupation of Poland. And then afterwards losing their lives to the Germans on the premises of the ghetto and in several German death camps.

The square was erected around 1838 as the second market square for Podgorze, which was a separate town. After 1880 it bore the name of Maly Rynek (Little Market). In 1917 it saw another name change to Plac Zgody (Concord Square). This was because of and in memory of the incorporation of Podgorze to the city of Krakow in 1915. So the present name of the square dates from 1948. It commemorate the Polish Jews who were to lose their lives in the Krakow Ghetto between 1941 and 1943.

As can be seen the Ghetto Heroes Square is in the center of the old Krakow Ghetto. The main gate to the ghetto once stood where the present entrance to the square is, coming up from the Wisla river. In March 1941 the Germans locked up all the Krakow Jews inside the recently-built ghetto. Over 20,000 people were living within the ghetto walls, where previously only 3,000 people had lived.

The one and only non-Jewish inhabitant of the Krakow Ghetto was Tadeusz Pankiewicz, who had a pharmacy within the ghetto walls. During the existence of the ghetto he and his personnel provided all kinds of help and aid for the Jews imprisoned there. Incidentally the Eagle Pharmacy still exists. And it’s currently one of 14 branches of the Historical Museum of the City of Krakow.