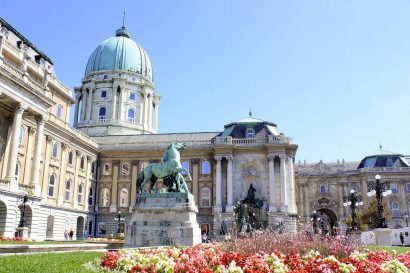 The history of Budapest, the Hungarian capital, is that of a city which has more than one 1000 years behind it. Starteding life as three separate cities, Pest, Buda and Óbuda. They were were united in the second half of the nineteenth century in 1873. This unification of the three independent cities was only made possible by the building of bridges across the Danube. Before the completion of the Chain Bridge in the year 1849, only ferryboat service and a temporary wooden bridge connected the two banks.

Going way back, the caves of Buda were used prehistoric men for shelter; and it is also known that Buda was first settled during the Bronze Age.The arrival of the Romans, who stayed for over 300 years, resulted in the construction of new towns and baths. A major outpost was the city of Aquincum in the nowadays Óbuda area. After the withdrawal of the Romans, Óbuda slowly lost its importance. At the time of unification, it was a city with industry and commerce. Not much is left of the charming little town that once was, and today is it mostly vast pre-fab housing projects built by the communist government. It is also known that this area is where the original “Magyars” settled when they first arrived.

After the invasion of the Mongols in 1241, the first significant fortress – what became today Buda Castle – was built here for the protection of the population. Since the Middle Ages, it has been the seat of Hungarian kings. The Anjou King Charles I of Hungary was crowned in Buda, which became his capital, meanwhile, Óbuda became the city of the queens. Then came the Turks, and in 1526 the Hungarians were defeated at Mohács.

Under Turkish rule, most of the city was ruined and many of its inhabitants killed. But on the plus side, their did leave us with lots of Turkish baths and temples. Hungarian gastronomy had also been extensively influenced by Turkish cuisine. After 145 years of Turkish rule, Buda Castle was freed in 1686 but at a heavy cost. As the city was being rebuit in 1703, Buda was chosen as the capital of the Hungary.

If you want to learn more about the history of Budapest and Buda Castle, join us on our Buda Castle Walk.