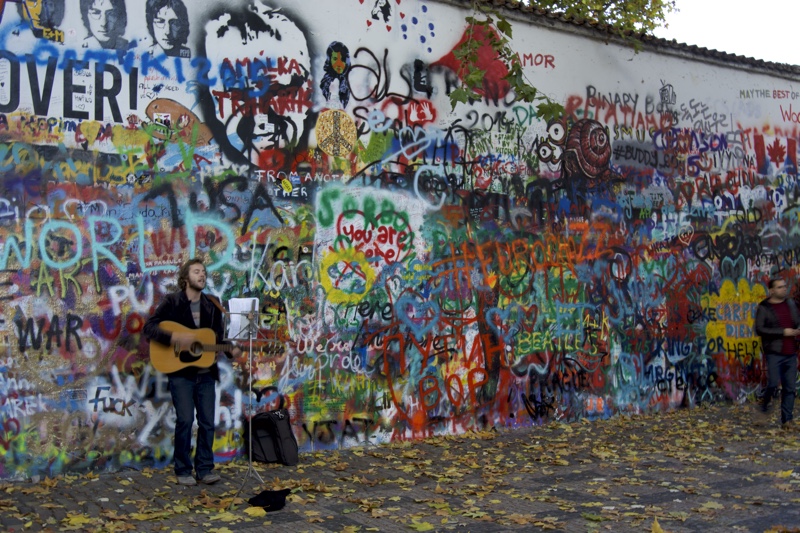 Prague’s John Lennon’s Wall draws crowds of visitors every single day. Many people stop to take some pictures or leave there their own message. But how did all of this start?

The history goes back to 60’s when people left different messages on this wall, mostly protesting against communist regime. Because of that, the wall received in the 70’s a nickname – “Wailing Wall”. Besides anti-regime messages people often wrote romantic short poems on it. 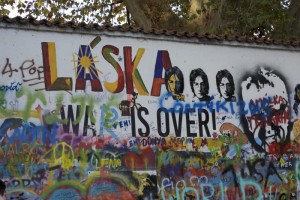 After the death of John Lennon people, used an empty stone board which was originally part of Prague’s water conduit to create a symbolic grave for John Lennon. People brought flowers and candles to this symbolic grave, commemorating this freedom fighter and symbol of peace. In the 80’s people started leaving some basic of information about John Lennon and lyrics of his songs, along with other Beatles’ songs. As you can imagine, this wasn’t welcomed by the Communist regime. Consequently in 1981 the wall was completely painted over in green paint.  This act angered a lot of people. As a direct result the nature of the messages left on the wall changed dramatically. Romantic poems and songs gave way to political and anti-Communist messages.  This became a cat and mouse game between the regime who painted over the wall and people who were repeatedly painting slogans on wall.

After the fall of communism in 1989 this wall became a symbol of freedom. Now everyone can write on it. So the wall changes every single day. In post-communist history the John Lennon’s wall was painted over just twice. The first time in year 2000, when an art group Rafani painted it over in white with one only word  “LOVE”. It was a symbolic answer on that time’s complicated political situation.

The second time it was painted over in white was in November 2014 by an art group called Pražská služba, who left on the wall only one message; “WALL IS OVER”. This referred to the 25th anniversary of the collapse of Berlin wall as well as Lennon’s song “War is over” from 1971. At this moment it almost ended up in court. Angered Czechs and the owners of the wall said that these vandals had destroyed a precious piece of cultural heritage. It ends with an official apology from Pražská služba, after which the owner stops the complaint being sent to the municipal court. 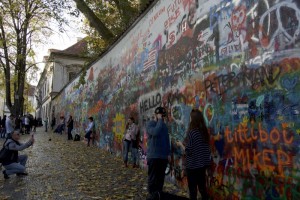