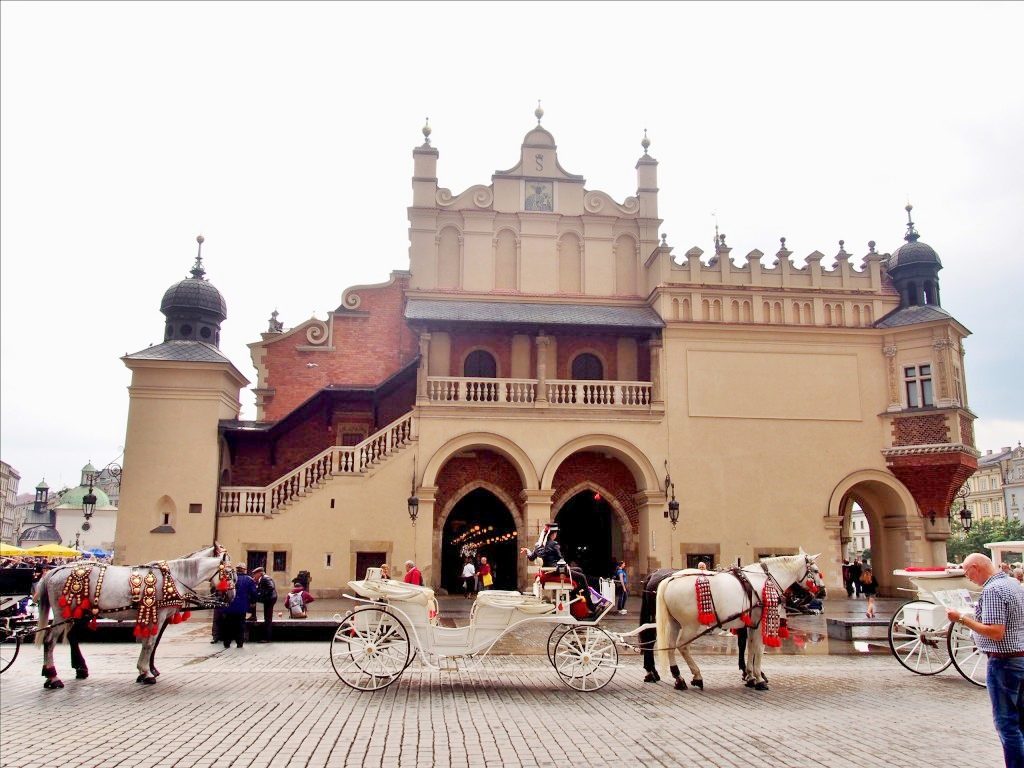 You can see it jutting out from the center of Krakow’s Market Square like the crown of some giant, half-buried king. The Cloth Hall (Polish: Sukiennice) is one of the largest, and most stunning examples of Baroque architecture in Southern Poland. It was built in the 14th century as a market for Polish textiles merchants to ply their wares. Now you’ll find that the Cloth Hall still serves its original purpose as a marketplace. Also it’s where visitors can buy souvenirs and eat traditional Polish cuisine at one of many fine restaurants. It’s also a place to continue learning about Krakow’s 1,000 year history at two world-class museums, one of which is underground! 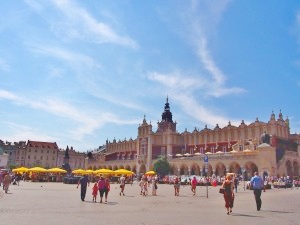 The original Cloth Hall appeared much different to what we see today. The structure was built in the medieval times as a place for merchants to sell textiles (thus, the “cloth” in Cloth hall). It reached its heyday as an international marketplace in the 15th century when Krakow was one of the largest and economically powerful cities in Europe. Then slowly declining into disarray over the course of the next four centuries due to various fires, wars, and political partitioning of the country. The Cloth Hall was finally renovated during Southern Poland’s economic boom under Austrian rule during the latter half of the 19th Century. This is when Polish architect and Renaissance enthusiast Tomasz Pryliński gave it the Baroque face lift we see today. Renovations began in 1875 and finished in 1879, including the opening of the modern Sukiennice Museum on the upper level. Today, the Cloth Hall is almost never empty. It’s constantly bustling with foot traffic, from tourists, diners, shoppers, and travel photographers looking for that perfect shot.

The souvenir stands in the Cloth Hall are open from 10:00 in the morning until 06:00 at night. After dark, the north-south passageway is not accessible, but the east-west passageway remains open. The Cloth Hall’s many restaurants, which include some of the city’s best dining, stay open until late. It also boasts two museums, both different in tone and the variety of exhibitions. On the upper level is the Sukiennice Museum, which holds an impressive collection of famous 19th century Polish paintings and statues. Venturing downstairs, the Rynek Underground museum on level B1 features myriad small but interesting modern exhibits about Krakow’s history. These include holograms and smoke screen displays. There’s even a 1,000 year-old segment of the city’s stone foundations.

Some other places to shop in Krakow: HERE

More info: Details of the Rynek Underground Museum can be found here.

Costs: Entry is free. Purchasing tickets for the Rynek Underground museum are 19zl for a normal ticket, 16zl for cheaper tickets for elders and young adults under the age of twenty-six, and 15zl for group tickets.

Best time to see it: Daytime