The Danube flows majestically across half a continent. It gave rise to magnificent civilizations, unites countries and nourishes art wherever it appears. As a matter of fact it was the famous Austrian composer, Johann Strauss who composed an entire waltz dedicated to the ever blue Danube. And with it, he conjured all our devotion and admiration for this river into melody.

The river originates in the Black Forest in Germany. Then rushes across ten countries before finally ending her journey at the Black Sea on the eastern coast of Romania. Since the dawn of time, her banks have been the pride of a thousand wondrous cities. Only one of them was called the Pearl of the Danube. Here in the north-western part of Hungary two cities were built. The Danube separates the ancient, noble town of Buda from Pest which is the buzzing social center of the capital. However she also divides the country into two sections whose geographical attributes are very different. The western part of the country is full with hills and mountains. Conversely the eastern part is home to the Hungarian Lowlands. 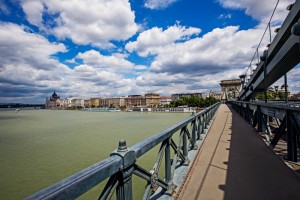 Of course the people of Budapest have managed to create a harmonious co-existence with the Danube over the centuries. In addition the breathtaking architectural heritage clearly echoes their affection and respect for her on both sides of the river. Even the local expressions and proverbs have preserved the marks of a thousand-year old affiliation between man and water. Incidentally until the 19th century only ferry boats were able to cross the river between the two cities. So there was always a pressing need for a permanent connection for the two sides. In Budapest the first bridge was in 1849. And this was the Chain Bridge. Following it was the construction of eight more bridges stretching over the Danube. Each one is a marvelous piece of traditional or contemporary architecture in its own right..

Furthermore you can visit to the beautiful Danube Promenade on our Absolute Walking Tour. So why not admire the spectacular view from the Fishermen’s Bastion on our Castle Walk Tour. Or simply immerse yourself in the magical nocturnal atmosphere of Budapest on our Night Stroll Tour. Be it night or day, the atmosphere that the Danube creates in the Hungarian capital is both magical and romantic. Certainly it’ll give you an experience that you’ll still remember in years to come.

Presently, including the industrial bridges in the outskirts of the city, Budapest has 9 bridges. Of these, 7 are in and around the downtown area (Árpád Bridge, Elizabeth Bridge, Chain Bridge, Liberty Bridge, Margaret Bridge, Petőfi Bridge, Rákóczi Bridge) 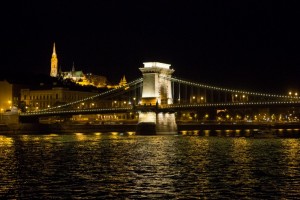 The best spots to take pictures of the Danube and its bridges: