Now wait, which is Buda , which is Pest, and what is “Oh Buddah”? 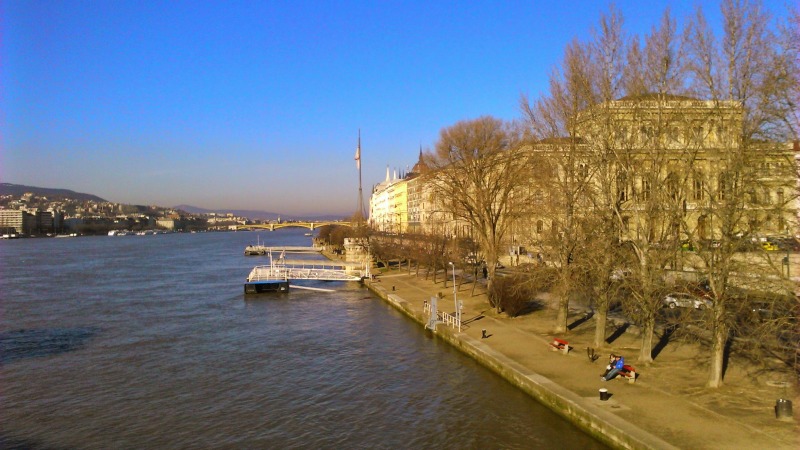 Pest, seen from the Széchenyi Chain Bridge. Buda and Pest.

The name Budapest is a combination of two city names, Buda and Pest. It became a single city with the unification of Buda and Óbuda on the west bank of the river, and Pest on the east bank. The three cities were only united in 1873. Our tours cover both sides of the city: the Castle district walk takes place in Buda, and the Absolute walking tour starts in Pest but finishes in Buda.

To this day there is a little confusion about the origin of these names, but let’s see the most credible theories based on historical facts.

Without doubt, Óbuda means old Buda. Alright. But what is ‘Buda’?

Let’s travel back in time and imagine we live in the Roman Empire. In the Carpathian basin, on the west bank of the Danube there is a province called Pannonia and its capital is Aquincum. After the fall of the empire lots of different tribes arrive to the territory, but it is finally settled by Slavic peoples. They translate the name Aquincum and get the word ‘voda’, meaning water. This word perfectly describes the area abundant in water springs. But in the 9th century Hungarians arrive and conquer the territory and start referring to it as Buda. Linguists enforce this idea, and it all makes sense, right?

But there is an alternative explanation based on chronicles from the Middle ages. After the fall of the Roman Empire, for a short period of time the Huns also conquered the Carpathian basin. Attila the Hun had  brother called Bleda and according to some stories, he established the first settlement here under his name. Thus historians say that the Hungarian word ‘Buda’ comes from his name.

All in all, one of these words (voda/bleda) was slowly transformed to ‘Buda’ during the course of history. But one thing is for sure; it has nothing to do with Buddha! 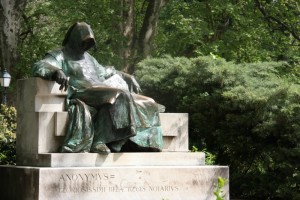 Statue of Anonymous, city Park, in Pest. Buda and Pest.

The ‘Pest’ bit is a little easier. First of all, it has nothing to do with the plague (pestis in latin)! As far as we know, this one really comes from a Slavic word (something like pec), meaning ‘oven’ or ‘cave’. But an alternative theory goes back to the Roman times again, when they built a fortress on the east side of the river, referred to as Pession, but there are very few resources supporting this idea. 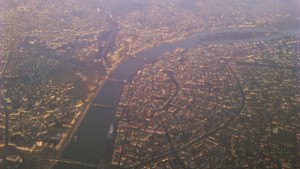 Budapest from the air, Hilly Buda on the left, Sprawling Pest on the right. Buda and Pest.

Remembering which is Buda and which is Pest

Do you wanna know the mental trick to remembering which side is which side? Pest is big and flat, just like a pancake, hosting the Parliament building.

On the other hand, Buda is all bumpy because of the hills. Easy, isn’t it? :)