Szeroka Street, The Ancient Heart of the Jewish Quarter 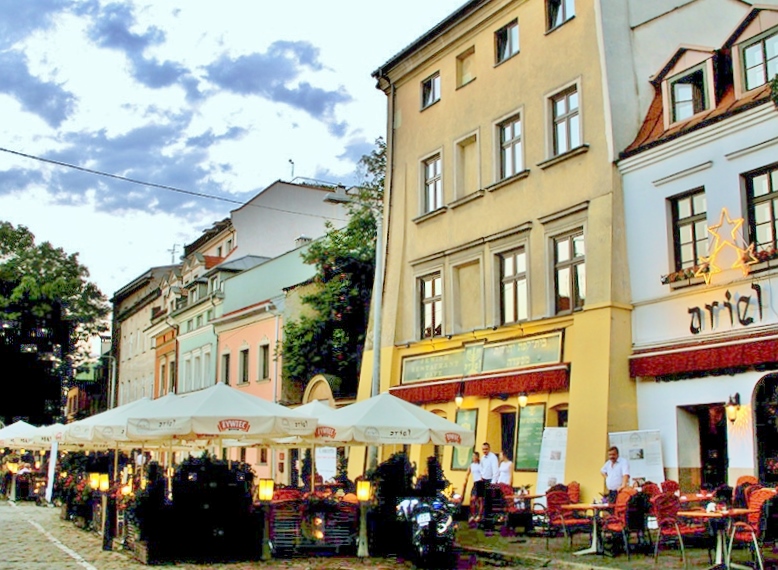 The Kazimierz is Krakow’s Jewish Quarter. Presently you’ll find it’s brimmimg with funky and vibrant cafes and restaurants. These are welcoming to both locals and tourists alike. Meanwhile where to spend your time here becomes a difficult question. This is because Kazimierz has almost too much to offer. Accordingly all the streets appear lined with busy establishments. Moreover all of them seem to be fighting for your attention. 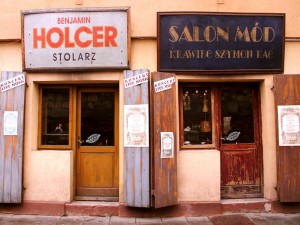 Today there is a much smaller Jewish presence. Of course Kazimierz tries to maintain some of the the Jewish atmosphere. This is out of respect and  of remembrance towards a different time. As a consequence, there many places offering a taste of Jewish cuisine in Szeroka Street – pronounced “Sheroka”. Actually Szeroka Street boasts some of Kazimierz’s best examples of Jewish, Polish and Israeli food. This includes Dawno Temu na Kazimierzu, which can be translated as “Once upon a time in Kazimierz”. Here you’ll find a menu of traditional Jewish cuisine alongside an interesting décor. In addition the outside is disguised as a 20th century Jewish shop. Furthermore a few other restaurant options are Ariel for Jewish delicacies and Hamsa for modern Israeli dishes.

In the beginning of the 14th century Krakow led a rebellion against King Ladislas the Short. So as to avoid a similar fate, the next king of Poland, Casimir the Great, founded a separate town. And this was on a large island on the Vistula River in 1335. Eventually this was to take over as Poland’s capital. And that’s how Kazimierz was created. As a matter of fact the majority of the Jewish Community resettled in this area in the 14th century. Then a fire in June of 1494 saw the destruction of a large area of the city of Krakow between Mikolajska and Szewska streets. This was including part of the Jewish quarter. King John Olbracht gave those Jews who had been burned out new parcels of land in what is now Szeroka Street in Kazimierz. Incidentally Kazimierz was at the time still a separate city. The long square that is Szeroka Street was once the Market Square of the Jewish Town.

Presently it still attempts to preserves some of the ambiance of the old days. And with its colorful buildings, it’s a pretty sight even if just for an evening stroll. Actually as well as restaurants and cafes, it’s also home to a Jewish bookshop. Here you can find books in a multitude of languages. Also alongside this is are antique stores and galleries. This street lies between two synagogues. The Remuh Synagogue, which is the most active in the Jewish Quarter and the Old Synagogue which now is a museum.