If you’re on the right bank of Vltava River then there are two squares you should try not to miss. The Old Town Square and Wenceslas Square.

Although Wenceslas Square is confused by many people as a boulevard or some long street, it actually is a square, just with very unusual shape. Charles IV was the original founder as one of the main squares of his New Town of Prague. Together with Charles Square they became the biggest squares in the world of its time. The original name wasn’t so fancy – it used to be called just the Horse Market, before Czech nationalists renamed it in 19th century. 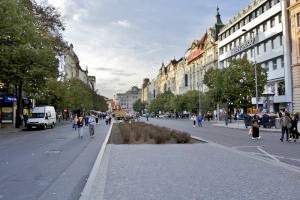 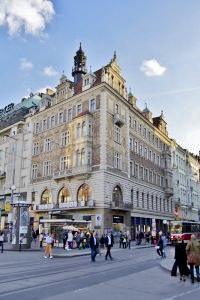 Because of its enormous size it had always been the best place for the big public gatherings and demonstrations.  The most fascinating history this square was facing was modern history of the 20th century.  The first frightening thing for local was a parade of Hitler’s troops in year 1939, when he took over Czechoslovakia. Wenceslas Square became the main boulevard for his big military parades that should demonstrate his power. But military vehicles were here not only during the period of WWII.  One of the darkest moments of Czechoslovak history was a soviet occupation in year 1968, when enormous army of around 200 000 soldiers with 5000 tanks entered Czechoslovakia. Obviously, the biggest demonstrations happened on this square.

So when you’ll be passing by the square, ask your guide about the stories of courageous Czechs who stood against the regime in many demonstrations as well as a few others, who laid down their lives here in the hope of change.