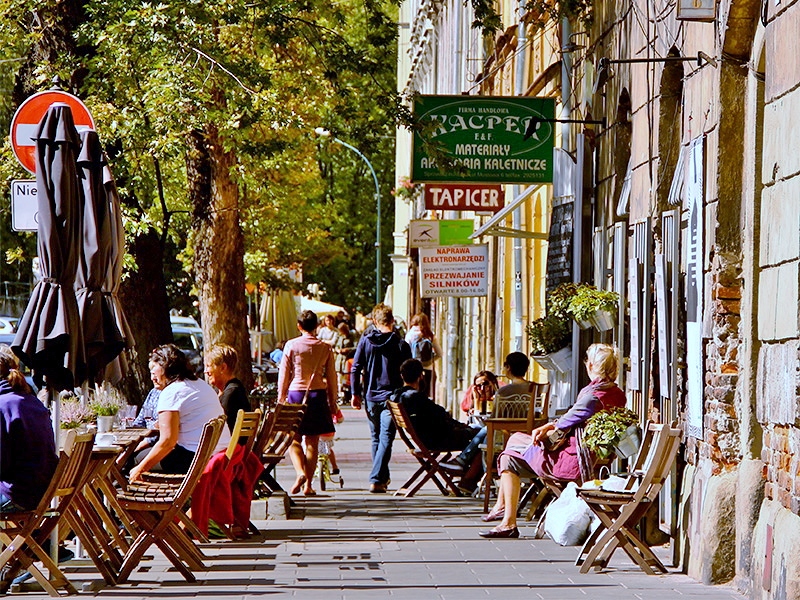 With its bohemian cafes and attractive nightlife, Kraków’s Jewish Quarter, known locally as Kazimierz, has become a must-see on every visitor’s list. Located between Dietla Street and the Wisła River, the district is best appreciated on foot.

Walking through Kazimierz’s network of cobbled streets, you will notice building disrepair, though this really only adds to its charm. Kazimierz has had a somewhat harsh history. As well as being ransacked by the Swedish in the 17th Century it was then badly damaged in the great fire of 1866. Then left as mere rubble by the Nazis during WWII. Its then-prospering Jewish community had been moved to a new ghetto across the Wisła River, before being deported to the closest camps. After WWII, the Jewish population had fallen to a tragic level. An estimated at 3000 to 5000 people. This left the district in a neglected state during communist times and was an unpopular neighborhood.

The Jewish Quarter began to regain its popularity around the same time Spielberg came to film his award-winning film, Schindler’s List. Visitors can still follow the trail of filming sites that appear in the movie. Your guide will surely point them out. Just a year before the filming started, the Jewish Cultural Festival was reinstated, becoming a popular yearly tradition.

An evening’s exploration usually starts at Plac Nowy, the central plaza of Kazimierz. Although Plac Nowy lacks the grandeur of the Old Town Square, it is always alive with activity. Young people queue around the rotunda’s open windows ordering Kraków’s favorite street food, Zapiekanki, with your choice of toppings on a 30cm baguette. Bars such as the candlelit Alchemia and vintage-style Singer surround Plac Nowy. The morning in Kazimierz Jewish  quarter are busy with merchants selling everything from fresh fruits and vegetables, to clothes to antique treasures.

In Down Szeroka street, you’ll be able to sit on one of many terraces and savor Jewish cuisine. Wandering further into Kazimierz, you will also find bookshops selling books in most popular languages. And you’ll have the pleasure of gazing at multiple synagogues. Some of these hold permanent exhibitions such as the Old Synagogue. A few synagogues such as the Remuh and Tempel synagogues still hold services for Kazimierz’s Jewish community.